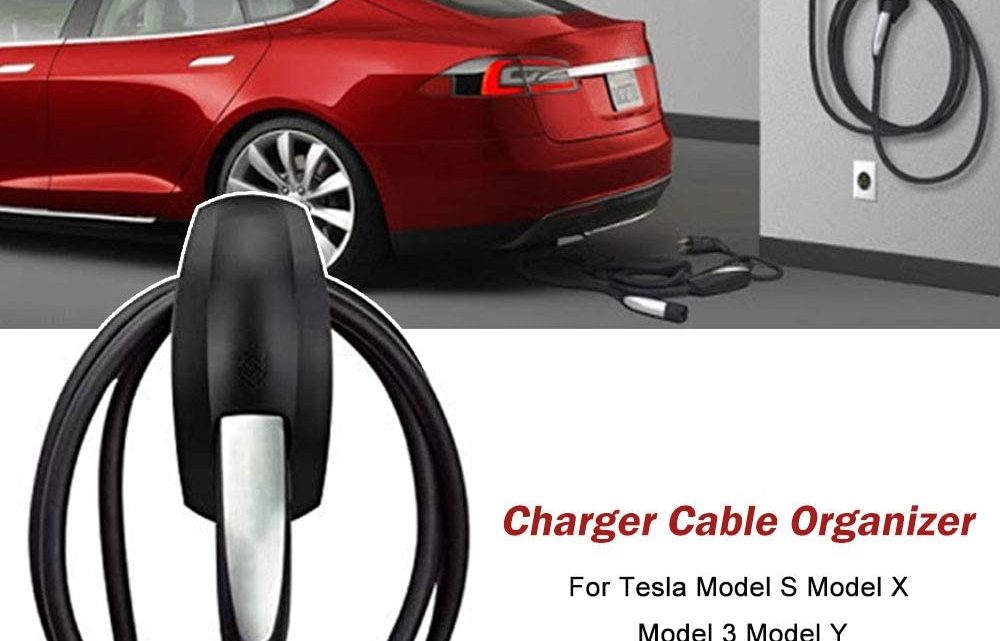 With the impending ban on the production of new petrol, diesel, and hybrid cars, purchasing reputable electric vehicles from brands such as Tesla have become more and more popular. With an expanding range of vehicles, from the saloon to the utility vehicle, the Tesla is rapidly becoming the benchmark for the electric vehicle. 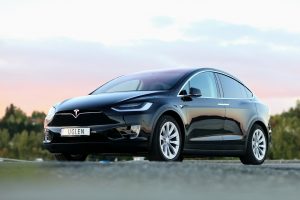 When purchasing your new Tesla, you need to think about the interior and exterior accessories that can go with it to make your Tesla the perfect car for you. In this article, we will be analyzing the best Tesla cable organizer outdoor versions, as there is a difference between the indoor and outdoor variations. In their shopping section, Tesla do provide a cable organizer of their own, but we will be looking at the best ones available on Amazon. 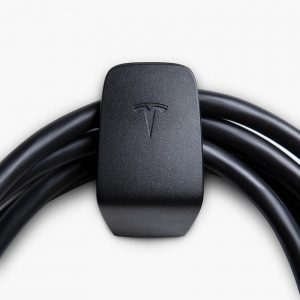 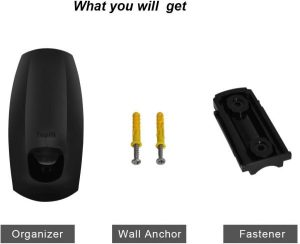 ThinSGO have designed a charging cable organizer which can be mounted to the wall and is compatible with all models in the Tesla range.  The organizer kit comes with the organizer itself, wall anchors and a fastener to make assembly much easier. Retailing at $16.99, the organizer is made of plastic with and internal metal plug which is designed to be protected from rain, dust, and snow. The mount allows you to wrap or hang the cable as you wish. The organizer comes with a 30-day warranty, so if you do encounter problems with it, the product can be returned. Customers have praised the ease of the assembly and the use of the plastic cover, which can protect the organizer against the elements, but some have described the plastic cover as being a tad flimsy, meaning that you may need to buy a spare cover to give yourself peace of mind.

BMZX have designed a similar charging cable organizer to that of the ThinSGO organizer, which is compatible with all of the models in the Tesla range. BMZX have advertised this as the perfect accessory for the Tesla charger and described the organizer as being a “simple addition” and made of ABS plastic, meaning that it contains a heavy-duty organizer that can protect the plug against all weather extremities.

Retailing at $16.99, the organizer has received very positive reviews from customers, stating that the installation was easy and that it holds the connector well. Some, however, have commented that it can be difficult to remove the charging cable from the holder. 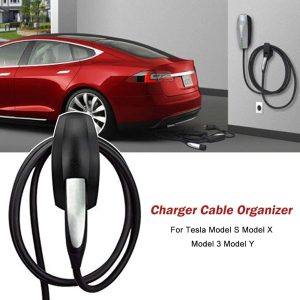 SUMK have created a black charger cable organizer which can be used for all Tesla models. SUMK have made the organizer from ABS plastic, to ensure that the plug is protected from the elements and to also ensure that the cable does not kink or get tangled in any way, thus advertised as extending the lifespan of the Tesla charger. Currently being sold for $16.99, the organizer is easy to install and comes with wall anchors and screws. Consumers have praised the fact that the QR code on the box directs you straight to the installation video, meaning that you can follow a step-by-step guide on how to install the organizer. Some have, however, stated that they have difficulty in fitting the Tesla charger to the unit and that is difficult to remove.

EVFIT have introduced a charging cable organizer that is simple in design and that can be mounted to a wall. Selling for $16.99, the charger holder is customized for the American version of the charger and is made from heavy duty plastic, which is designed to protect the interior from any potential weather damage.

With the installation taking only 5 – 10 minutes, customers have praised the way in which the bracket can be screwed into the stud but have also advised of alternative assembly methods if this is not possible. Some customers have criticized that this product is only available for the American market (even though the advert clearly states this) and have argued that one needs to be made for further international markets. 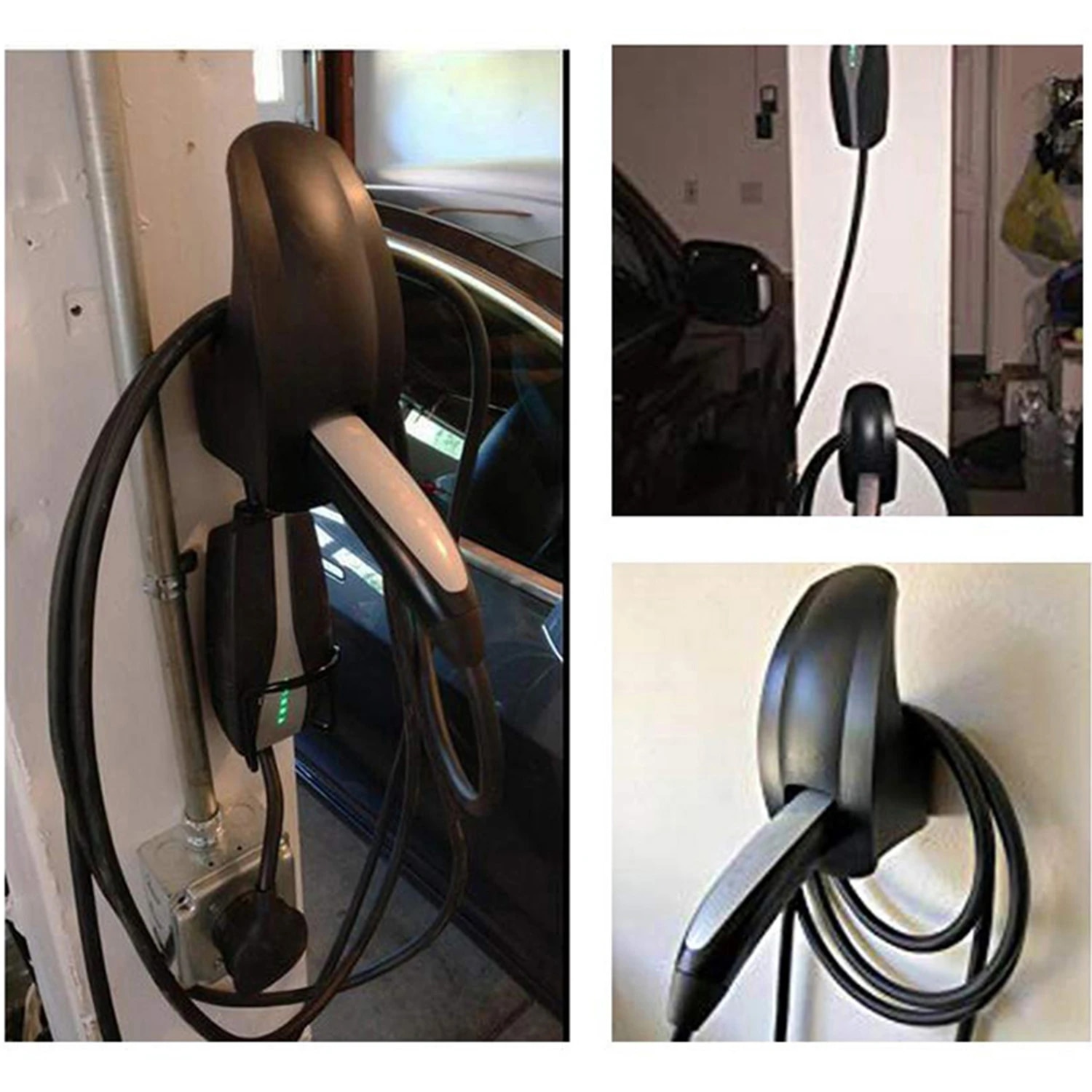 ARU have designed a charging cable organizer which, at $12.99, is cheaper than the organizers reviewed so far. A universal cable organizer (suitable for all Tesla models), it is easy to assemble and has been described as a convenient wall-mount holder than can keep the charging plug clean and tidy, as well as reducing the risk of tripping over the cable. The holder allows you to wrap or hang the cable, which prevents it from being kinked or tangled in any way and contains a notch which prevents the cable from sliding out. Customers have praised the plastic casing and the ease of assembly but have stated that the organizer does not come with a mounting bracket or screws, which is a major snag with this product.

LECTRON have designed a charger mount and cable organizer which, as with the previous products reviewed, is designed for all Tesla models. LECTRON state that the cable organizer is durable, is easy to install and comes with a one-year warranty.

The organizer is selling for $19.99 and has received positive reviews from customers, who have praised the ease of assembly and the value for money of the product. Some, however, have stated that the fitting itself is loose and does not come with a locking mechanism.

When you are buying a Tesla cable organizer outdoor variant, there are a few points that you need to think about. You need to make sure that the casing is strong and sturdy enough to withstand all extremities of the weather, the ease of installation and whether the holder allows you to wrap or hang the cable as you wish.

If you like our review on the best Tesla cable organizer outdoor, don’t forget to check out some of our other Tesla-based reviews, including:

https://truckdashcam.net/tesla-wireless-bluetooth-controllers-overview/ – where we look at the best Tesla wireless/Bluetooth controllers for the in-built games in the infotainment system

https://truckdashcam.net/best-tesla-ps4-controller/ – we analyze the best PS4 controllers that can be used in the Tesla to keep gamers entertained whilst out and about!